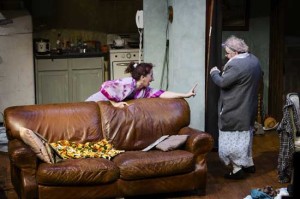 “But the actor who steals this production is Marssie Mencotti, as Sadie. Another character given minimal dialogue, this actress wins laughs with her dumpy appearance, her honest, contorted facial expressions and her varied delivery of a single word, ‘Okay.’ Simple, lovable and charming as can be, Ms. Mencotti’s portrayal of Sadie is one of the best reasons to see this production.” —Colin Douglas for Chicago Theatre Review

“It’s the Chicago summer theater fantasy: some company you never heard of stages a show you might never have noticed if not for the seasonal lull, and it kicks ass. Well, here’s where the fantasy comes true. The No Stakes Theater Project has put together a funny, sad, strong production of the 1992 drama by English writer Jim Cartwright, about a profoundly withdrawn young woman and her bullying, alcoholic mother. When it’s discovered that the young woman, Little Voice, has a peculiar talent, some very bad things hit the fan. Spiritual kin to Shelagh Delaney’s A Taste of Honey, the play offers marvelous opportunities that are snapped up by the entire cast—but especially Rebecca Sohn as the monstrous mom and Scarlet Sheppard as Little Voice, a kind of pop oracle possessed by divas like Judy Garland and Edith Piaf. Marssie Mencotti has an irresistible turn as an old lady weirdly reminiscent of onetime SNL cast member Tim Kazurinsky.” —Tony Adler for Chicago Reader

“This is one of those large-cast plays that pivots on one role. In this case, it’s Stella, played to fierce, irascible, dotty perfection by Mencotti. While she’s on stage, the play glows with life—and when she’s not, it tends to limp and dither, despite the universally relaxed and responsive ensemble acting. At one point, director Cody Estle envelops the audience in a dramatic pause of almost painful length and intensity, as Stella cogitates on whether to grant an oil lease on the family’s acreage. It’s a moment of pure theater, impossible to replicate in any other medium.” —Hugh Iglarsh on “Dividing the Estate” for Newcity Stage

“Marssie Mencotti as the matter-of-fact Irma unselfconsciously steals every scene she’s in. She’s brilliant nibbling on an olive or sipping her perpetual ‘rum and cola.’ And she can turn a ho-hum remark like, ‘When it rains, it rains — don’t it?,’ into a snappy reflection on fate.” —Lucia Mauro on “When the Walls Have Ears” for ChicagoTheater.com

“Outstanding among the cast were Marssie Mencotti as Wimsey’s Duchess mum. Mencotti has the style of her role down perfectly and stole every scene she was in.” —Rick Reed on “Whose Body?” for Windy City Times